This Conservation Week, from 15 July to 19 July 2019, Iziko Museums of South Africa will be hosting a series of talks around the conservation of artworks. Aimed at creating an awareness of the importance of preserving and conserving artworks for present and future generations, the talks will take place at the Iziko South African National Gallery – inviting the public to actively engage with a series of art industry professionals, practitioners and curators.

The first public event is a panel discussion titled Should Contemporary Art Last? On Tuesday, 16th July at 13:00 – 14.30 at the Iziko South African National Gallery. The panel will touch on a wide range of topics pertaining to contemporary artworks, posing questions such as ‘can we collect artworks with expiry dates?’ and ‘Should there be boundaries for the acquisition of contemporary art in a public a museum’, to name a few topics that will be dissected and analysed in this discussion.

The following day there is an open talk titled More Than Paint: Art on the Edge on Wednesday, 17 July 2019 from 13:00 until 14:00 at the Iziko South African National Gallery. Assistant Professor in Paintings Conservation at Queens University in Canada, Patricia Smithen, will share stories about some of the more unusual ‘painted’ artworks encountered throughout her career – as well as their issues, and the creative solutions devised to preserve and protect them.

On Thursday, 18 July 2019 at 17:30, Patricia Smithen will conduct an exclusive interview with South African contemporary artist, Penny Siopis, at the South African National Gallery. The interview will focus on Siopis’ artistic trajectory and practice – highlighting both her conservation and preservation considerations when creating work. This interview will be the first of its kind in creating an interdisciplinary dialogue with artists and cultural workers around the production, presentation and preservation of their work.

Please book your spot and RSVP to Nomapatho Mesele at nmesele@iziko.org.za
The address for the Iziko South African National Gallery is: 80 St Johns Road, Cape Town.

This event is free, entrance to the Gallery will not be charged. 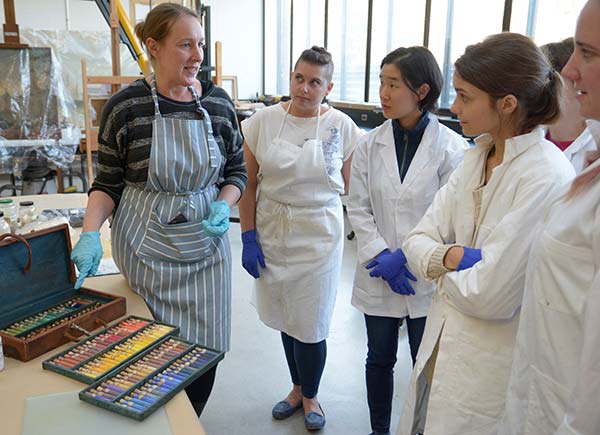 Patricia Smithen started as Assistant Professor (Paintings Conservation) at Queen’s University in July 2017.  Patricia graduated from Queen’s University, Kingston (1993) with a Master’s in Art Conservation, specializing in paintings and painted surfaces, following an Honors B.A. in Art History and Critical Theory from the University of Western Ontario.

After working as a paintings conservator at the Canadian Conservation Institute, in private practice in Montreal and at the Detroit Institute of Arts, she joined the Tate Conservation Department as Conservator of Modern and Contemporary Paintings in 1999 and assisted in the preparation of works for display at Tate Modern’s opening in 2000. Patricia organised the “Modern Paints Uncovered” conference in 2006 and was the conservator for the Tate AXA Art Modern Paints Research Project undertaking surface cleaning studies and treatments on acrylic paintings from the Tate Collection.  She has studied and treated key paintings by Anselm Kiefer, Salvador Dali and Mark Rothko, among others. In 2007, Patricia became the Head of Paintings Conservation at Tate, then Head of Conservation Programmes in 2010 where she planned Tate Conservation strategy for exhibitions, displays and loans out and, together with the Head of Conservation Collection, co-managed a team of 50 specialist staff. She left her role in 2015 to take up doctoral research into the development and impact of artists’ acrylic paints in the United Kingdom through the Collaborative Doctoral Awards Programme at the Courtauld Institute of Art and Tate Gallery.  She plans to submit her thesis for consideration this year.

Penny Siopis currently lives and works in Cape Town. She is an Honorary Professor at the Michaelis School of Fine Art, University of Cape Town, and has an Honorary Doctorate from Rhodes University, Makhanda (formerly Grahamstown).

Her solo exhibitions include This is a True Story: Six Films (1997-2017), a retrospective of her film works up on exhibition at Zeitz Museum of Contemporary Art Africa (MOCAA), Cape Town (2018); Incarnations at the Institute of Contemporary Art Indian Ocean, Mauritius (2016); Penny Siopis: Films at the Erg Gallery, Brussels (2016); Time and Again: A Retrospective Exhibition at the South African National Gallery, Cape Town (2014), and Wits Art Museum, Johannesburg (2015); Obscure White Messenger at Brandts Museum, Odense, Denmark (2014); Red: The iconography of colour in the work of Penny Siopis at the KZNSA Gallery, Durban (2009); Three Essays on Shame at the Freud Museum, London (2005); and seven solo exhibitions at Stevenson, Cape Town and Johannesburg (2007-2019).

Siopis has participated in group exhibitions at the Tate Modern and the British Museum, London; Kunsthaus Dresden; Beirut Art Centre, Lebanon; Yerba Buena Center for the Arts, San Francisco; Pérez Art Museum Miami; Jeu de Paume and La Maison Rouge, Paris; Museum of Contemporary Art, Oslo; Tennis Palace Art Museum, Helsinki; The Walther Collection, Neu-Ulm/Burlafingen, Germany; and the Hood Museum, New Hampshire, among other institutions; and the biennales of New Orleans, Venice, Taipei, Sydney, Johannesburg, Gwangju, Guangzhou and Havana. Awards include the Alexander S Onassis fellowship for research in Greece; and residencies at Delfina and Gasworks in London; Civitella Ranieri in Umbria; the Tropen Museum in Amsterdam; and Ampersand in New York. She is a recipient of a Lifetime Achievement Award from the Arts and Culture Trust of South Africa.

Iziko operates 11 national museums, the Planetarium, the Social History Centre and three collection‑specific libraries in Cape Town. The museums that make up Iziko have their own history and character, presenting extensive art, social and natural history collections that reflect our diverse African heritage.  Iziko is a public entity and non-profit organisation that brings together these museums under a single governance and leadership structure. The organisation allows *free access to all individuals on commemorative days, (*excluding the Castle of Good Hope and Planetarium). Visit our webpage at www.iziko.org.za, join our online community on Facebook (www.facebook.com/IzikoMuseums) or follow us on Twitter (@Iziko_Museums) for regular updates on events, news and new exhibitions.