The collections of African Art in the Permanent Collection of the South African (SA) National Gallery mirror the histories of independence, division and democracy that have shaped the character of our country over the last century and a half.

Approximately 3 000 works primarily representative of the diversity of South Africa reflect expressive styles across the region. Aesthetics are expressed in media such as beadwork, sculpture, metalwork, weaving, carving in wood, bone and horn, and our collection includes exquisitely crafted items for use as adornment, regalia or for ritual or personal use. 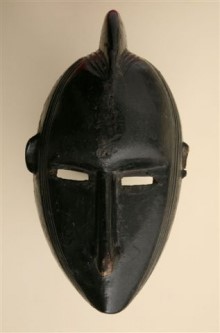 The collection originated in the 1970s with the contribution of former curator and sculptor Bruce Arnott  – also Deputy Director at the time – whose interest in West African sculpture eventually led to the acquisition of a small selection of works from such regions as Central Africa, West Africa, Benin and later, beadwork from South Africa.

In the 1990s the board of the SA National Gallery expanded its acquisition policy to include the purposeful collection of African art, particularly from South Africa, in order to address past omissions.

The first black artist to have work shown at the SA National Gallery was Moses Tladi, a talented watercolorist who was included the first Exhibition of National Contemporary Artin 1931. Besides a few exhibitions that included Central and West African sculpture, “non-Western” art was treated as ethnography and housed in the appropriate collections of the South African Museum across the park.

Thus were excluded the important visual traditions  produced by much of South Africa’s population, resulting in an intellectual and  visual conservatism that to this day characterizes South African popular taste.

Europe’s modernist frenzy and interest in African art did not impact on our collections until almost a century later. In this regard the SA National Gallery lagged behind the example set by both global art museums – much influenced by modernism and its interest in African art –  and local institutions such as the Johannesburg Art Gallery and Wits.

By the 1970s these had developed rich local collections of African art including sculpture, beadwork, personal and ritual objects and regalia. With the advent of a new Director at the SA National Gallery in 1990 (Marilyn

Martin) vast collections of the cultural production of South Africa’s diverse population were acquired in the  anticipation of momentous change by the outgoing Nationalist government.

At the time of the liberation of Nelson Mandela and the new spirit of democracy, the intention in acquiring these works was, redress. Formerly marginalised artists were now included and represented in the national art collection. 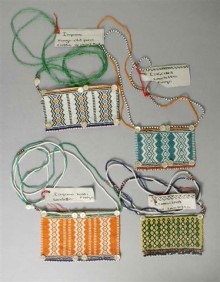 To date, the collection has grown from strength to strength and expanded considerably, necessitating relocation into a new storage area in the former library of the SA National Gallery now converted into a well organised secure space. The works are stored and catalogued according to their collection history or provenance – eg. one of our most expansive collections consists of mid-20th Century beadwork made by women artists from the Eastern Cape field collected by Stephen Long, known as the Stephen Long Collection of Eastern Cape Beadwork.

We also have a fine and extensive mid-20th Century collection of beaded regalia from KwaNdebele collected by Anelle Zaloumis in the early 1990s. Some of these wonderful examples have been used as the subject of the 8th Definitive Series of South African Beadwork on Stamps, launched by the South African Philatelic Services in October 2010.

In addition to beadwork we have important objects that were repatriated through purchase or donation. An iconic pair of engraved Nguni cattle horns depicting scenes form the Anglo-Zulu war of 1879 made by an unknown Zulu -speaking artist practicing in Newcastle, KwaZulu-Natal c.1880; and a magnificent maternity staff also made by an unknown carver at around the same time were returned to South Africa from overseas by the generous action of the SA Department of Arts and Culture and the government of Germany.

In order to keep the collection interesting, fresh and attract new and younger audiences regular exhibitions are held that draw upon our collection as well as the extensive former ethnographic collections held in the Social History Collections of Iziko Museums and outside loans.

The most recent exhibition was Imaging Beauty – Body Adornment including Young SA Designers that opened on 27 November 2010 and closed in April 2011, featuring the work of local young fashion designers. 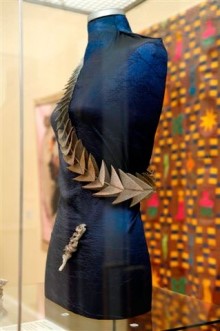